Virtual Reality is an immersive experience which your students will never forget. Visit exotic destinations, manipulate the anatomy of extinct creatures, ride in a formula one, the scenarios are almost endless. Here are some of the best apps to discover virtual reality in the classroom.

But first we need to explain the semantic difference between realities.

Various concepts all end in reality: 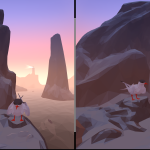 Virtual Reality (VR) is the most immersive as it lets you experience a complete different situation than the one you are currently in.  To discover this new 3D world, you will need to wear a headset which will project the new reality in front of your eyes. These range from very cheap like the Google Cardboard + smartphone combination to very expensive such as Oculus Rift, HTC vive, or Playstation VR. These latter VR devices also feature audio and tactile experiences. You can see the 3D display in the screenshot on the side, depicted as two separate screens for each of your eyes. VR is the most talked about and as such as become a catch phrase for other similar experiences. 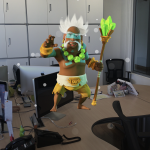 Augmented Reality (AR) begins with a natural view of the world around you, onto which a device adds (the augmentation part) other elements, typically computer generated. Augmented Reality can be experienced with most smart phones and does not require any specific head gear. An AR app will use the phone’s camera to project the real world and add objects in specific locations mapped for the purpose of the application. In the example in the image, a 3D character was superimposed onto the desk in our office. He is anchored in a specific spot so if I look away from that spot, I will not see him anymore on my phone.

Is your Phone Smart Enough for Virtual Reality?

If you want to use a virtual reality app on your phone, it will need three very specific sensors:

The majority of phones on the market today will sport these features  but if you are unsure of this, use an app. EZE VR is an application to check the compatibility of an Android smartphone with virtual reality headsets by detecting if the smartphone has the necessary gyroscope and magnetic field sensors.

Once this initial check is done, you can dig into these other virtual reality apps.

When Google came up with the cheapest virtual reality headset, one which could be made out of cardboard, they also released an homonymous app to showcase what virtual reality could look like. Manipulate ancient artifacts, examine dinosaur skeletons at the American Museum of Natural History or fly amongst seagulls are some of the adventures that await you and your students. For many of us, this was our first taste of VR, and I still strongly suggest you begin here with the Cardboard app (available for iPhones or Android).

Once you are familiar with the basics of virtual reality and how to bring it into your classroom with cheap headsets like the Cardboard, the first app you can involve your students with is Google Expeditions. As its name suggest, the app will take all of you to explore together immersive, visual journeys across the universe, from the bottom of the ocean to the tallest mountain peaks and even into space aboard the International Space Station, One attractive feature of the app is that once your students join you on a virtual tour, you can point out specific parts of the panorama to them inside the app.  You can direct the group to focus by looking at the arrow when you are talking about something in particular. There are hundreds of panoramic tours and we started to curate the ultimate list of Google Expeditions per subject and per location.

All the 360 photos taken by Google and users alike uploaded to Google Maps are available as VR panoramas in Google StreetView. So if you did not find a specific location in the list of Google Expeditions, you can still take your students on a tour using the Google Street View app. To get started, launch the app on your phone, search for a location, and tap it to launch its street view. Finally tap the Google Cardboard icon displayed in the upper right corner and insert your phone in a VR headset. Head over to the Google Street View website.

A special note: Street View will show you one static image at a time. Google Earth takes it one step further and lets you go anywhere in real time. But for this you will need either the HTC Vive or the Oculus Rift (see VR vs. AR section above).

Within was founded by award-winning filmmaker Chris Milk and renowned technologist Aaron Koblin with the goal of exploring and expanding the potential of immersive storytelling. Through the Within app, you will discover captivating immersive experiences from the world’s finest VR creators: from imaginary world to documentaries taking you further inside the news than ever before. The Within app is available for iPhone and Android.

VirtualSpeech offers an interesting proposition to your students: it will teach them public speaking using realistic VR scenarios. Introverts beware! If you want to know how it feels to step out in front of a large audience (think TED talk) or rehearse an interview in front of a smaller committee, put the headset on and open your eyes. The idea behind the app is to give you realistic conditions to practice your speech. This app is interesting as it offers an insight into what virtual reality can add to the learning experience. The app is available on the VirtualSpeech website for Androids, iPhones, and Oculus headsets.

Finally it is worth knowing that you can watch YouTube videos with a virtual reality headset. Put your phone in a Google Cardboard, open the YouTube app on your phone, search for #360Video to find the official virtual reality YouTube channel.

Did we miss and VR apps you love to use in the classroom? Let us know in the comments below!