Out Back
/aʊt bak/
1. A collection of links discovered beyond the breaking waves of the Internet
beta version 16.19 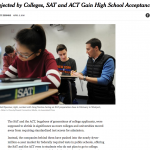 “It’s a little like the Gold Rush,” Mr. Marion said, adding: “For the SAT and ACT, the way they can really compete is getting a whole state to buy in. Berkeley can do what it wants, but if the SAT is in 50 states, guess what, kids are going to take it.”

“When a teenager with special needs refused to get back into his seat on a recent flight, the crew asked if there were any teachers on board and Sophie Murphy answered the call”.

“When you combined the virtual laboratories with teacher-led coaching and mentoring, then we saw a total 101 percent increase in the learning effectiveness, which effectively doubles the science teacher’s impact with the same amount of time spent”.

““The Present” is a graduation short from the Institute of Animation, Visual Effects and Digital Postproduction at the Filmakademie Baden-Wuerttemberg in Ludwigsburg, Germany. The short film was shown at over 180 film festivals around the world and garnered the team 59 awards”.

Companion Book for Out of My Mind

Give Your Presentations a Makeover